A VisionIntoArt and Beth Morrison production.

​Labyrinth was commissioned by The Krannert Center of the Performing Arts in association with VisionlntoArt and was developed and co-produced by Beth Morrison Projects and VisionlntoArt. 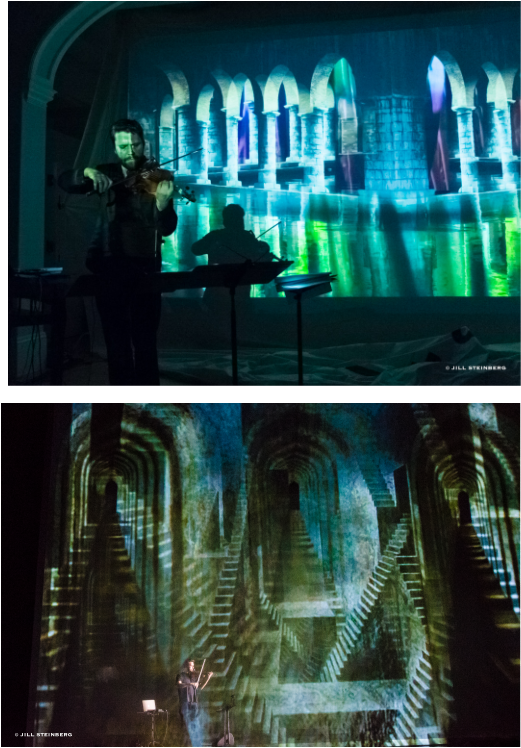 HOUSE OF SOLITUDE takes place within a house where three different video panels project three different video images by German video artist Carmen Kordas. The film and sound world hover between the poles of the essential human predicament: the frailty and folly of everyday existence on one hand, and the attempt to attain enlightenment/divinity, on the other. As the work progresses, the labyrinth of life deepens as the multiple violin identities unravel and the sound scape incorporates sounds of everyday life. It is only with the sound of “the hooves of maddened horses” that inspires the protagonist to live with strength. - Paola Prestini, Composer


VisionIntoArt offers me a great platform in collaboration with my images and videos reaching a higher level through their ambitious and to me very inspiring  music compositions. The visual implementation of The House of Solitude/Labyrinth will be more like an installation. The projection screens would present a three dimensional hologram emphasizing the journey of a physical and mental labyrinth leading us through the mind of the male character in this piece by using 3 gaze screens as a projection surface.
I generate all of my footage in the physical world, and morph it into the fluid shapes of dreams. There, they take a life of their own: they contort, grow, fuse, and age– they remind us where life originated and where we might be all headed – off into an unknown dimension.  Carmen

zurück
ARTS / ARTS IN REVIEW / MUSIC REVIEW
Cutting-Edge Concertos
Paola Prestini makes music that is at once both stealthily conservative and subtly ambitious.
By ALLAN KOZINN
Feb. 9, 2016 4:52 p.m. ET
Boston
Entrepreneurialism has become a byword among classical musicians lately, but few have mastered the art of founding a business upon creativity as deftly as the composer Paola Prestini.
Her latest project, “Labyrinth”—a pair of what she calls “conjoined concertos” for violin and cello, each with a subtly ambitious electronic accompaniment and an ambitious video element—has been slowly taking on a life of its own since its 2014 premiere at the Krannert Center, in Urbana, Ill, which commissioned it. A recording (on VIA, naturally) created a buzz among new-music fans when it was released last spring, and on Thursday evening, the piece took over Calderwood Hall, the peculiarly appointed four- level chamber music Theater at the Isabella Stewart Gardner Museum.
In each concerto, the soloist is the protagonist in an inner exploration, a psychological probe described in both Ms. Prestini’s musical maelstrom and the video imagery. In “House of Solitude,” the journey is one of withdrawal and disconnection. In Carmen Kordas’s video, images of building facades, windows, close-up body parts and eerie stone staircases flow together, ending in the picture of a denuded tree.