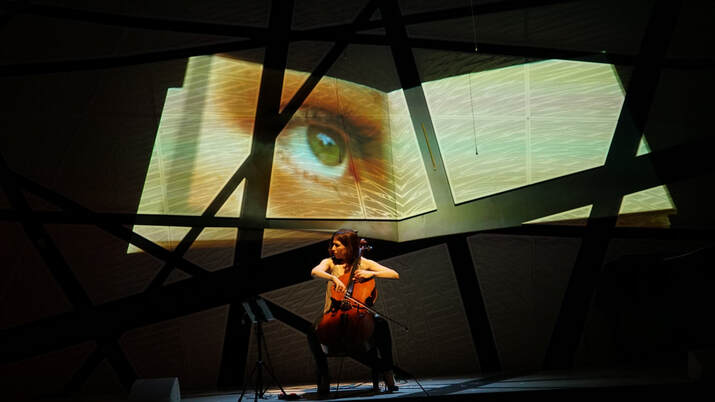 Play Video
Inbal Segev Celebrates 21st Century Women (and One Man) at Roulette Christian Kriegeskotte
on March 14, 2019 at 6:00 am the concert entitled “21st Century Women” offered a complete, multimedia experience with pulsating textures of pre-recorded electronics and a dazzling variety of projected images and films.

The program opened with Legend of Sigh by Iranian-American composer Gity Razaz, featuring expressionistic video projections designed by Carmen Kordas. As the composer’s program notes indicated, “Legend of Sigh explores the themes of birth, transformation, and death through the retelling of an old Azerbaijani folktale about a mysterious being, Sigh, who appears every time someone lets out a heartfelt sigh.” Razaz adapted this tale to tell the story of a reclusive, wealthy widow who unwittingly calls upon Sigh as she prepares to end her life and thus embarks upon an adventure of renewal and revelation under Sigh’s guidance. An ambient layer of retro electronics and pre-recorded loops of the cello accompanied Segev as she brought Razaz’s cinematic work to life. Making use of flowing waters, misty landscapes and faceless characters standing in isolation or moving reluctantly in agitated crowds, Kordas’ melancholy imagery effectively complimented Razaz’s storyline.